Keras was released two years ago, in March 2015. It then proceeded to grow from one user to one hundred thousand. 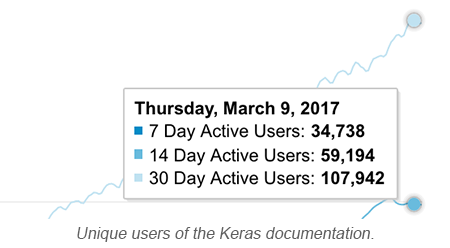 Hundreds of people have contributed to the Keras codebase. Many thousands have contributed to the community. Keras has enabled new startups, made researchers more productive, simplified the workflows of engineers at large companies, and opened up deep learning to thousands of people with no prior machine learning experience. And we believe this is just the beginning.

Now we are releasing Keras 2, with a new API (even easier to use!) that brings consistency with TensorFlow. This is a major step in preparation for the integration of the Keras API in core TensorFlow.

Many things have changed. This is your quick summary.

Although Keras has supported TensorFlow as a runtime backend since December 2015, the Keras API had so far been kept separate from the TensorFlow codebase. This is changing: the Keras API will now become available directly as part of TensorFlow, starting with TensorFlow 1.2. This is a big step towards making TensorFlow accessible to its next million users.

Keras is best understood as an API specification, not as a specific codebase. In fact, going fowards there will be two separate implementations of the Keras spec: the internal TensorFlow one, available as tf.keras, written in pure TensorFlow and deeply compatible with all TensorFlow functionality, and the external multi-backend one supporting both Theano and TensorFlow (and likely even more backends in the future).

Similarly, Skymind is implementing part of the Keras spec in Scala as ScalNet, and Keras.js is implementing part of the Keras API in JavaScript, to be run in the browser. As such, the Keras API is meant to become the lingua franca of deep learning practitioners, a common language shared across many different workflows, independent of the underlying platform. A unified API convention like Keras helps with code sharing and research reproducibility, and it allows for larger support communities.

The new Keras 2 API is our first long-term-support API: codebases written in Keras 2 next month should still run many years from now, on up-to-date software. To make this possible, we have extensively redesigned the API with this release, preempting most future issues. In particular, our new API choices are fully compatible with TensorFlow conventions.

Keeping in mind the large user base of Keras, we have done our best to minimize the number of breaking changes. However, some breakages are inevitable, especially for more advanced users.

Thanks to our contributors

Lots of people have committed code that has contributed specifically to the Keras 2 release. Many thanks to: